The Interior of the Church 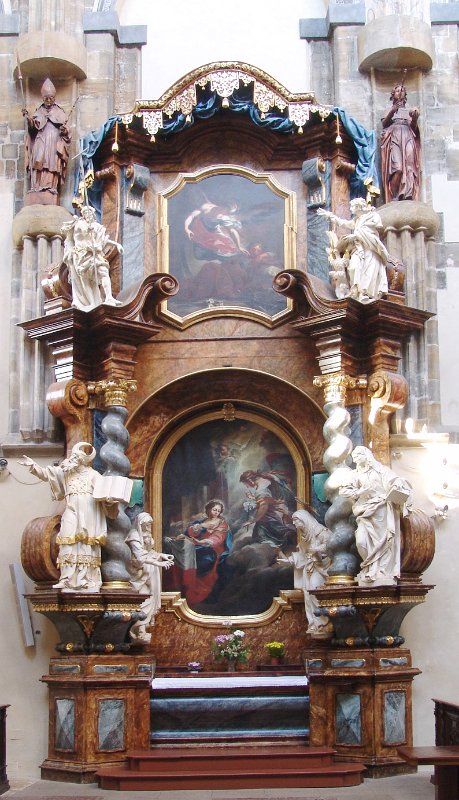 Two pairs of dynamic pieces of altar architecture on either side of the nave date from the high baroque period in the first half of the 18th century. Firstly, there is the pair of altars of St. Catherine and St. Francis from around 1730, situated opposite one another in the presbytery, with sculptures from the same period. Farther to the west is another pair of altars facing each other, the altar of the Annunciation and the altar of the Holy Cross. The altar of the Annunciation to Our Lady, situated on the northern side, is flanked by two pairs of statues, Joachim and Anna, and Zacharias and Elisabeth. The main altarpiece with a painting of the Annunciation is the work of V.V. Rainer from 1724, and the smaller picture of the Dream of St. Joseph on the upper panel is by the same artist. The painting of the Annunciation is one of Rainer s mature works from the period when he was at his creative peak.

The altar of the Holy Cross opposite this has a similar design. In the centre there is a statue of the Crucified Christ in a niche, with the figures of Our Lady and St. John the Evangelist on either side.

On the wall to the right of the altar of the Holy Cross is a painting of the founder of the church, Charles IV, a valuable work from the mid- 19th century. 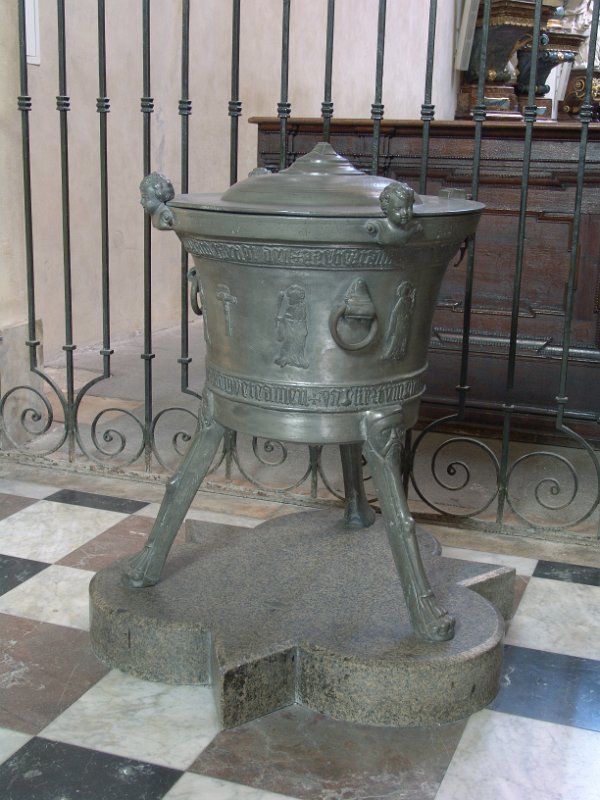 In the western part of the church, below the organ loft, is the chapel of St. Anthony of Padua, separated from the rest of the church by a noteworthy late Renaissance wrought iron grille from the mid- 17th century. The chapel was constructed in 1655, when the altar was consecrated, but the present furnishings are of later date. The stucco work on the vault and the fresco on the ceiling, the work of Karel Kovář, are from the same period as the altar. The fresco, which has faded a great deal, depicts the figures of St. Anthony of Padua and St. John of Nepomuk, both of them pointing to their illuminated tongues as a sign of their sanctity - the tongues of both saints remained uncorrupted in proof of their sanctity.

In the chapel, on the right-hand side, is a pewter late Gothic font dating from 1459, with a cover from the 16th century, decorated with reliefs of the apostles. It was brought here from the church of Our Lady on the Pool in the Old Town district of Prague, which was closed down in 1784 and then demolished; the parish was transferred to the church of Our Lady of the Snows in 1786.

On the northern side of the church, on the wall to the left of the altar of the Annunciation, in an 18th-century box-shaped frame, there is a votive picture of Our Lady and St. Joachim (St. Joachim teaching Our Lady), a late Renaissance work from the first half of the 17th century with mannerist features. Further on, closer to the altar, there is a smaller picture of Our Lady in Expectation behind a glass frame, evidently from the same period. On the wall to the right of the altar is a painting of the Pieta, an early baroque work from the second half of the 17th century.

The organ in the organ loft comes originally from the right-hand side gallery in the church of St. Nicholas in the Lesser Town district of Prague. It was built in 1747 by the Jesuit Tomáš Schwarz, and the remarkable late baroque appearance of the casing dates from the same time. The instrument itself was modified and expanded in 1832 by Josef Gartner at the time when it was transferred to its present position.