The Tympanum with Its Relief 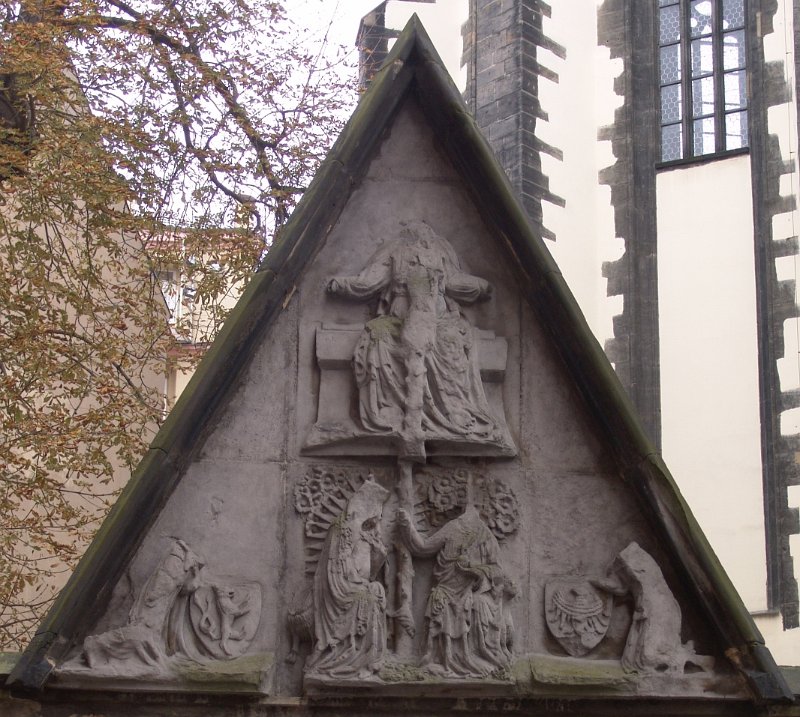 The relief with the motifs of the Holy Trinity, the Coronation of Our Lady and the kneeling figures of the patrons is an exceptional monument from the time of the foundation of the church and the monastery. It is today situated within the church complex, above the gateway to the former cemetery to the east of the presbytery.

It is, however, only a copy, the original being exhibited in the National Gallery, because it is one of the supreme works of stone sculpture of its time. In the upper part of the relief can be seen the "Throne of Grace" (Thronus gratiae, Gnadenstuhl). Below it is a scene of the Coronation of Our Lady with the bushes of Paradise in the background; the tree-like trunk of the cross descends into the centre of the scene from above, but it can clearly be seen that it is not integrated into it smoothly. On the right-hand side is Christ, enthroned on an eagle, and on the left Our Lady on a lion - the same motifs that we see on the coats-of-arms of the kneeling and worshipping figures of the patrons at the sides. The figures have been considerably damaged, which has made it difficult to identify them. On the right, with Christ, is Charles IV with the emblem of the imperial eagle, on the left with Our Lady is Charles’s first wife Blanche of Valois with the emblem of the lion, signifying that she was Queen of Bohemia.