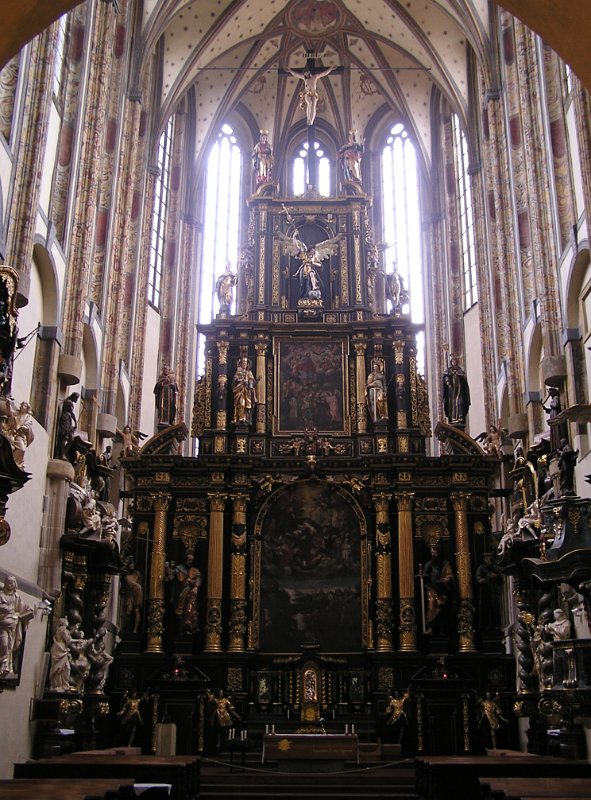 The main altarpiece of the church dates from 1651 and was commissioned by Jan the Elder of Talmberk. The largest and most extensive work from the earliest baroque period in Prague, it also comes from the workshop of Jan Arnošt Heidelberger. The monumental three-level structure of the altarpiece takes up almost the entire height of the eastern end of the church, with the top of it being just below the vault. A wealth of architectural, sculptural and decorative elements, with lavish gilding and polychromy, is used against a black background. On the keystone of the archivolt above the main painting is the polychrome coat-of-arms of the principal benefactor of the monastery, Jan the Elder of Talmberk, flanked by two putti.

In the lower part, there is an angel on either side of both exits to the area behind the altar, all pointing to the centre of the altar and the sanctuary. The main painting is flanked by four large statues of saints (John the Baptist, Peter, Paul, and Francis), while above them, surrounding a smaller picture of St. Francis receiving indulgences from Our Lady, are smaller statues of saints Clare, Elisabeth, Barbara, and Catherine. 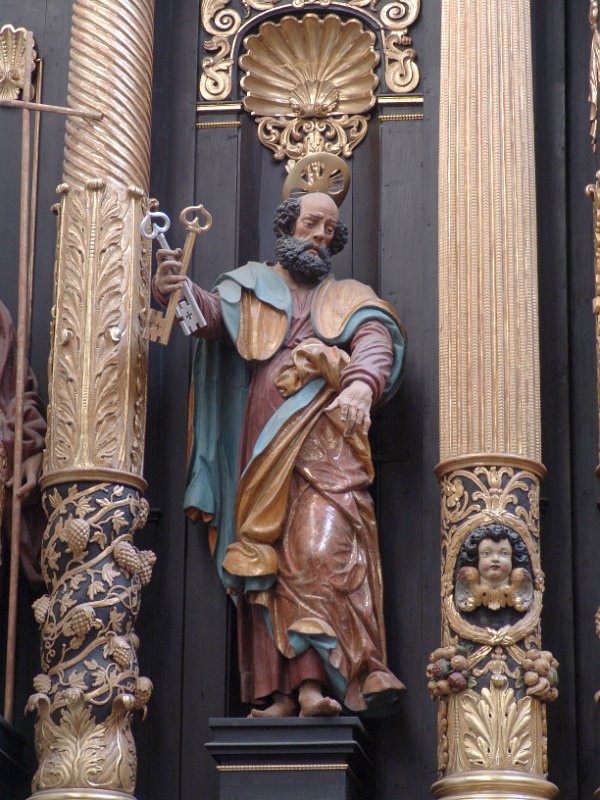 In the centre of the highest level of the altarpiece is the figure of the Archangel Michael with St. Wenceslas and St. Adalbert to either side, and the entire altarpiece is completed by a Calvary scene at the top. The figures of the angels at the bottom with their uplifted, dancing pose bear the mark of the end of the mannerist period.

The subject of the main painting is directly related to the dedication and title of the church, and portrays a miraculous event from the time of Pope Liberius, which according to the legend occurred on 5 August 352. A procession led by Pope Liberius is making for the Esquilin hill in Rome, while from out of the clouds the Mother of God, with a significant gesture, is pointing towards the summit of the hill, which is covered with snow - in the midst of the sultry Roman summer. It was on this spot, miraculously blanketed with snow, that the church of Santa Maria Maggiore was subsequently built. The two donors of the picture, Jan the Elder of Talmberk and his wife, are shown kneeling in the lower left-hand part of the picture.

On the upper panel above the main painting is a painting of the Vision of St. Francis in the Portiuncula, which the mayor of Prague Old Town, Mikuláš František Turek of Rozenthal, had painted in 1646 and then had a coat-of-arms added three years later. However, this picture is quite certainly not the work of the same artist as the picture of the Foundation of the church of Santa Maria Maggiore below it, and is undoubtedly of poorer quality. The original painting, on the same theme but of better quality, was taken down from the upper panel of the altar, and today hangs in the southern nave of the church, beside the organ loft.