The architecture of the monastery buildings, built in the 17th century, is characterized by moderation and simplicity of form, as is the tradition with buildings of the mendicant orders.

From the courtyard a portal leads into the cloister. A survey has revealed beneath its early baroque style remains of the original Gothic cloister of the Carmelite monastery, which we are also reminded of by the much lower level of the floor in comparison with the courtyard. The Gothic monastery was, however, situated further to the west than the present one, evidently encroaching into what is today Jungmann Square. The eastern part of the buildings ended with what today is the wall of the second monastery courtyard with the yew tree, which was then the wall of the Gothic chapter hall. The first tomb of the fourteen brothers who were martyred in 1611 was situated in the western wing of the cloister. The stone relief epitaph with the figures of the risen Christ and the donor, set in the wall in the northern wing, has been preserved from Renaissance times. The sculpture of the Pieta was moved here recently from the chapel of St. John of Nepomuk. 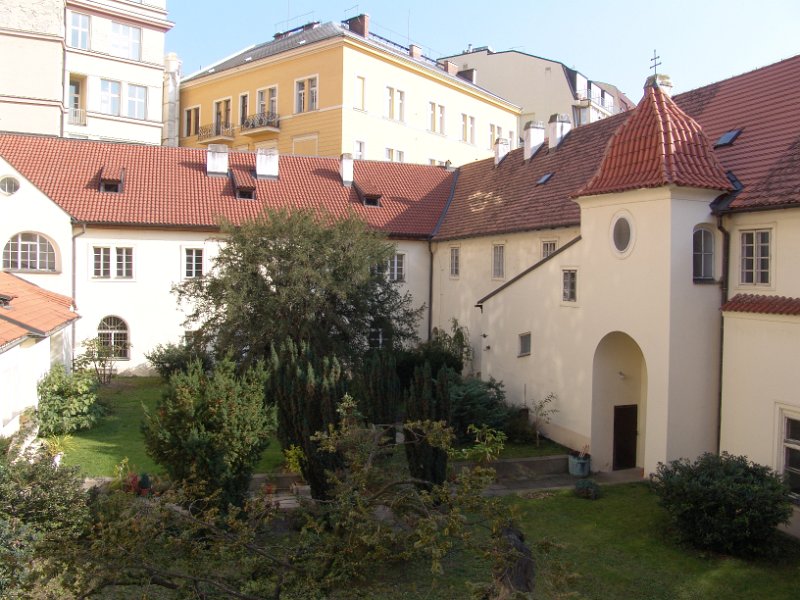 Adjoining the cloister on the southern side is the extensive vaulted refectory, the large dining-room of the brothers. Its eastern wall is covered by a painting with a Calvary scene, attributed to Karel Škréta, the most important early baroque painter in 17th-century Bohemia. The cellar area of the monastery also has a mediaeval character. It was originally part of the southern wing of the mediaeval monastery, and today houses the parish club rooms.

In the 1980s excavations in the eastern courtyard of the monastery uncovered the remains of the original Gothic chapter hall of the Carmelite monastery (although it has now been covered over again).

On the opposite side of the courtyard is a protected yew tree, whose age can only be guessed. If the baroque statue of Our Lady, which today is largely overgrown by the tree, was placed on the tree trunk at the time it was made, then the tree must be considerably older than the renovation of the monastery in the 17th century.

In the monastery enclosure there is also preserved a polychrome statue of Our Lady, evidently from the early 17th century. According to tradition, it was before this statue that one of the fourteen Franciscan brothers, Jerome of Ares, was murdered at the time of the invasion by the forces of the Bishop of Passau in 1611. This tradition was confirmed by the discovery of traces of blood found when the statue was restored recently. The conventual chapel, constructed in the 1990s, is dedicated to St. John Capistrano (l456), the first patron saint of the independent Bohemian province of the Franciscans. In it can be found the famous portrait of Capistrano by the German painter Thomas Burgkmair, part of his habit, and a piece of his penitential horsehair robe.