The Foundation of the Church and Monastery 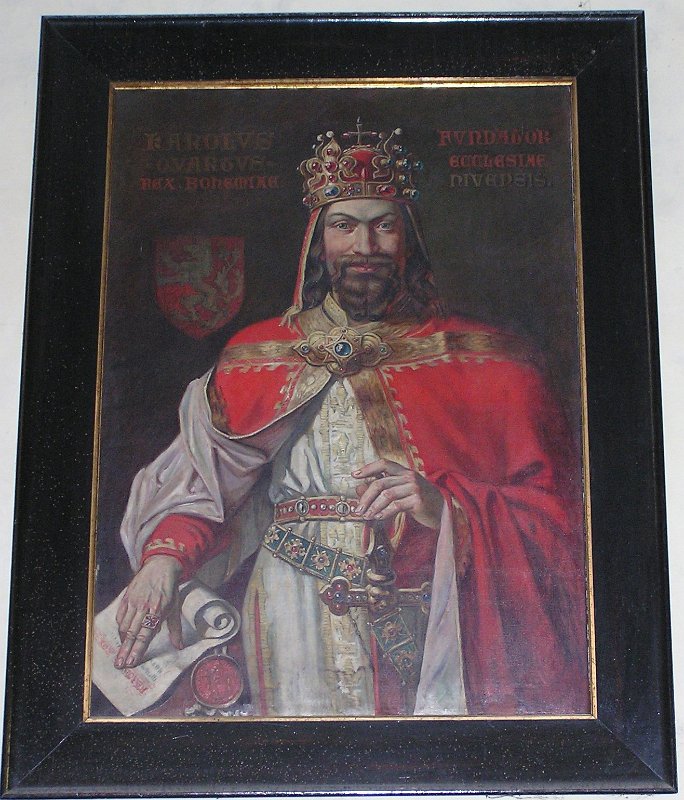 The monastery of Our Lady of the Snows was the first establishment of the Carmelites in Bohemia. In a charter dated 29 March 1346, Pope Clement VI gave permission to the Carmelites in Prague to build a church with a bell tower and a house for twelve monks. But the major role in the foundation of the church and monastery was played by the Emperor and Bohemian King Charles IV. The foundation stone was laid on 3 September 1347, in other words on the day after the formal coronation of Charles IV and Blanche of Valois as King and Queen of Bohemia: "On the day following the aforementioned coronation, King Charles founded a new monastery in front of the St. Gallus Gate, placed Carmelite brothers in it, and gave them the structures that had been erected for the royal banquet. They used them to make a wooden church and other facilities necessary for their activities."

On 19 November 1347 Charles issued the foundation charter of the church and monastery. In it he wrote that he granted the Carmelites in perpetuity a plot of land demarcated on one side by "the town walls and ditch" of the Old Town opposite the Gallus Gate, and on the other by "the garden and cemetery of the Jews", in other words the oldest Jewish cemetery known as the "Jewish Garden", dating from the same time as the Old-New Synagogue. Apart from the land, the monastery was not endowed with any property, and as a foundation of a mendicant order it was supposed to be built up and maintained by donations from the faithful. In time, however, it had to parcel out part of the land it had been allocated for the construction of houses, from which it gained an income. In this way the size of the original plot of land was considerably reduced.

It was on this land that the brothers were supposed to "construct for [themselves and] their successors a church and dwelling-house in honour of the Supreme Lord and His Most Glorious Mother". It is believed that the symbolism of the mediaeval Holy Roman Empire with its most important cities was an important part of Charles IV s conceptual design for Prague New Town, and the dedication of the churches evidently played an important role in this: thus the church of St. Ambrose was a reference to Milan, that of St. Charles the Great (Charlemagne) to Aachen, Saints Henry and Kunigund to Germany, and Saint Apollinarius to Ravenna.

Until recently it was generally thought that the central feature of the new monastery was a single-nave provisional church, the ruins of which are still preserved today in the northern wall of the choir. Recent investigations, however, have shown that the original intention of the Carmelites had probably been to construct the eastern end in three parts, although more modest in size than the present presbytery. This was created only after the original intention was abandoned. A text has been preserved which says that Prior Hartman of Tachov (who was head of the monastery from 1379 onwards) had a new choir constructed for the church, and that in 1397 he had it furnished with a roof and a large organ. It is therefore believed that it was Hartman of Tachov who decided not to adapt the existing church but to have a new and larger one built.